Learn how to use React and Redux with an API and a data handler utility to act as a bridge between our components and application state. 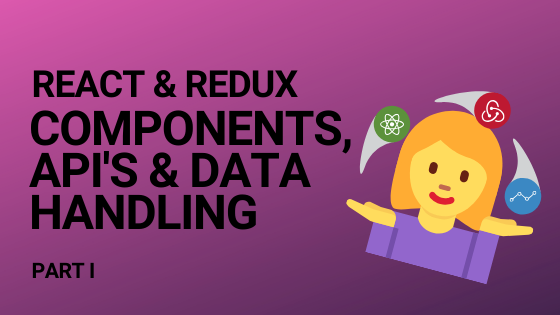 If you've been using React for a while, especially in a large, complex app, you'll have undoubtedly come across Redux. Redux is a state container responsible for maintaining a centralised 'state' of various slices of data in your app.

However, if you follow a lot of the tutorials out in the wild, Redux is often shown as being used directly within a component. Whilst this is fine and a perfectly valid way to call Redux's actions and dispatchers, when you mix in calls to an API, you can end up with really lengthy and ugly looking code. This becomes harder to maintain, more difficult for new team members to assimilate, and doesn't do as good a job of separating out the data handling concerns.

In this two part series, I'm going to show you the approach we use at IAM Cloud to separate out our API calls into a centralised data handler utility that keeps in touch with our calling component and the Redux state management system.

In this first part, we're going to look at the overall concept of using the trio of React, Redux and an API. We'll look at a very common example of how you can use an API to fetch data, and how to dispatch Redux to update your app's state using reducers and Redux actions.

In part two, we'll look at a real-life, production-ready code example that shows how to implement a data handler pattern and how to shift your Redux state management into its capable hands.

Sound good? Let's get to it.

The common relationship between a React component, a data API and the Redux framework looks like this: 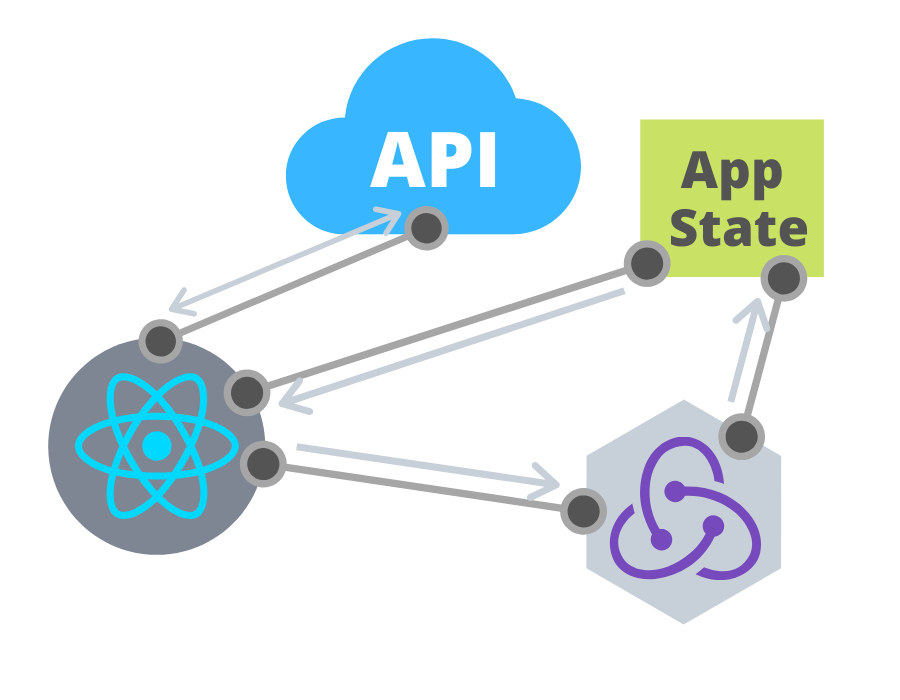 The diagram illustrates the flow from a user interacting with the component, to state updating. An example of this might go something along these lines:

React, API and Redux in practice

Theory's all good and well, but let's take a look at a real example. If you'd like to have a browse at the code right away, then you can visit the Code Sandbox I've set up for this example and take a look.

(Sidebar: Now, I'm assuming you're at least a little familiar with Redux; if not in practice, then hopefully in theory. It can be quite a difficult concept to wrap your head around and I've certainly struggled in the early days of using it, but stick with it, as it makes your life really easy once the building blocks are in place. For this example app, I've wired up all the necessary reducers, action creators and state, following the really clear guides and documentation found on the React-Redux site itself.)

What we're looking for here is a simple button that when you click it, will call an API that returns some user data which is pushed into app state, then is displayed as a nice unordered list. 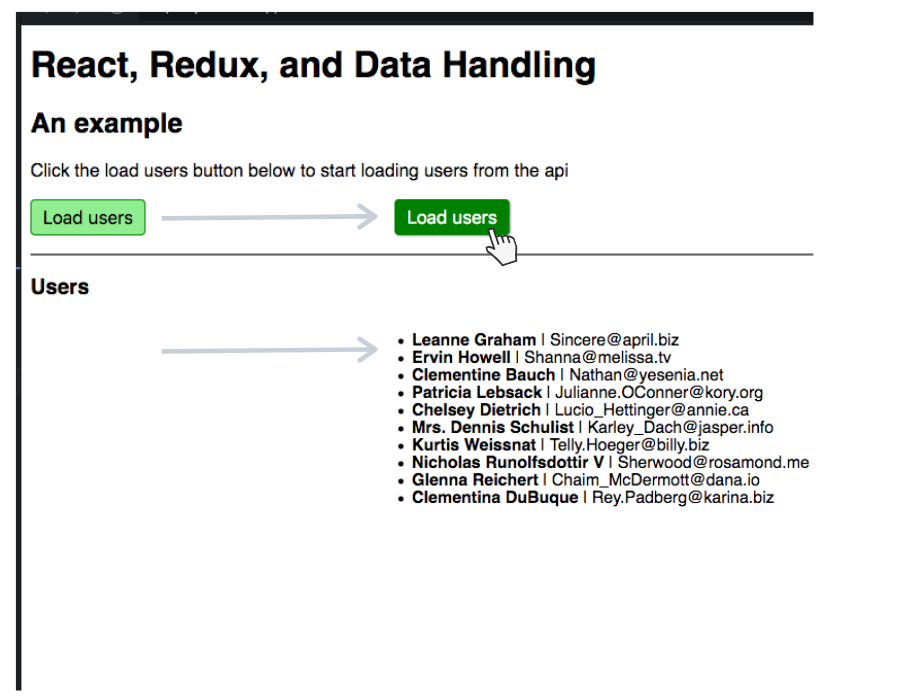 To do that, first, we'll set out the building blocks of the App component.

Nothing too fancy here. We've got some plain HTML with a simple button wired up to an internal click event handler handleLoadUsersClick() . Under that, we have some props values to show a loading message and display the list of users once we've loaded them and they're available.

Now to add in the Redux operations

Of course, we'll need to populate these props values from our app state. The props, loading and users will be supplied from the central state by Redux. However, we need to get them using the connect() function that Redux supplies.

We'll also need to add our Redux actions in and wire them up to our App component.

To achieve these goals, we need to create two objects (or functions that return objects) which will both map our central state to our props, and map Redux's dispatch service to our props respectively.

Let's add the connect() function to our App component and the two functions that wire up state and dispatch.

The main imports section and App implementation remain the same, but we just add in our new imports

To load in the connect function from React Redux, and to grab our reducer actions from another file — that's the getUsers and getUsersSuccess named imports above.

Now, we'll wire up elements of our app state into the App component's props:

This is a very typical setup where we create a function that returns an object whose properties map to a number of props that our component can use. In our case, we're using this.props.users to create our unordered list of users.

Next, we create a similar function to map Redux's dispatch function to the component's props object:

With this function, we're accepting the Redux dispatch method (which will act upon our actions) and we build and return an object that will also be passed into our App component's props. In this case, we're returning a bunch of functions that our App can call to dispatch Redux actions and, ultimately, update our state.

Finally, we wire up the state props, dispatch props, and our App component using the Redux connect function in this bit of code:

Wiring up the button handler and our API call

The final step in the puzzle to make everything hum is to make our button click handling event actually do something.

Currently, whilst connected to the onClick event of our button, the handler method is looking a little sad and empty:

So let's populate it with some of our Redux actions and our API call:

The first thing we need to do is call our Redux dispatch method onLoadUsersClick(). If you follow the Code Sandbox example code through, you'll see that this sets the 'isLoading' flag to 'true'. We're passing this piece of state into our App component's props, and it's being used to show and hide portions of the UI, such as a little 'loading...' message.

Next, we call our API. In this case, I'm using a handy free tool called JSONPlaceholder. It has a bunch of endpoints that return dummy data, but it's effectively a live API out in the wild. In our case, we're calling the 'https://jsonplaceholder.typicode.com/users' endpoint that will return a nice set of user data — name, email, address, that sort of thing.

Using the native JavaScript fetch() method for this, we call the API, format the response into some JSON, before finally passing this data to our other Redux dispatch function we set up earlier, onLoadUsersComplete(). The action it calls updates state by setting our list of users and switching the 'isLoading' flag to 'false'.

Here is the complete, embedded example of all the code above in all it's working glory.

Why is the above example bad?

It's perfectly acceptable code that's relatively clean and tidy and can be followed nicely by a developer's eyes as to what it's doing.

This example is quite small and very contrived. When you're dealing with real-world apps that are usually much larger and more complex and feature more moving parts, this sort of approach to integrating your API calls with your Redux actions and state management within your components can come with some drawbacks and some areas that can be improved:

We've used a few services and frameworks across the span of this article, so here's a helpful list of them in once place for your convenience:

Coming up in part II

In part two, we'll be looking at how to improve this set up for more clarity, as well as abstracting the interactions with the API into a generic data handler utility. We'll even look at how you can create a reducer factory that will handle common state updates, such as updating a list, on your behalf, reducing code and creating a handy convention for your components to follow.

Continue on to part two now. 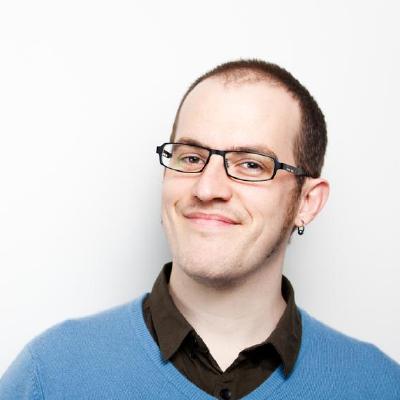 There are lots of articles on how to build a Node API server but they're either quite duff or very complex. None of them seem to deal with reading and writing to JSON files. Well let's change that by building our own Node API server using JSON data storage!

Part two of the series on learning to use React and Redux with an API and a data handler utility to act as a bridge between our components and application state.

Can you build a simple, lightweight code and syntax highlighter using Prism JS and React? Sure you can. I'll show how I did it in no time flat.